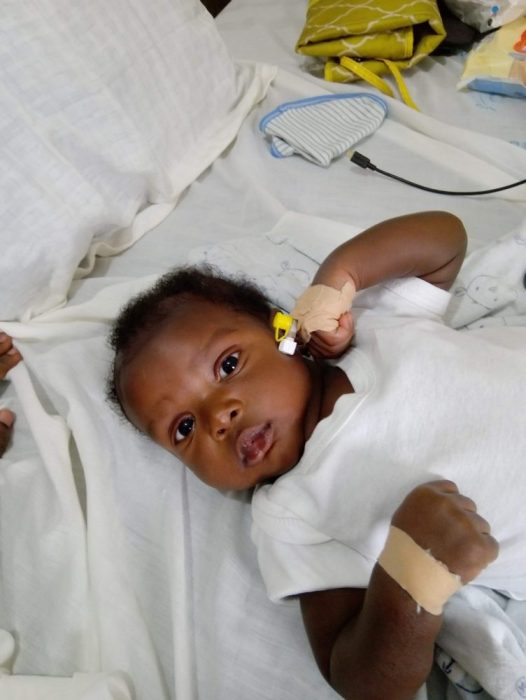 In sickness and in health. Yes, these are words very popular with marriage rather than kids. But you know what? When you decide to have a kid (or a kid decides to have you as a parent 🤭), you pretty much take the same vows. For most people, it’s all about the “awww they are soooo cute” days. But hard times do come when you are raising kids. One of those hard but least talked about times is sickness! Boy, it can literally make you sick.

The first time Asempa was unwell, he was about 10 months. I came home from work and my babysitter informed me that he’d been having a fever on and off and was a bit dull. I gave him some paracetamol syrup and went with him and hubby to a program at church. He threw up while we were there and that got us rushing to the hospital. It was nothing much; we got some meds and off we were. I was so shaken. Funny, I hadn’t seen anything yet. Lol. We similar hospital visits throughout the rest of that year 2018, maybe about 3 or 4.

Fast forward to 2019. It all started when Asempa resumed school in January and a few weeks later, came home with a cold. Now, this is a “normal” part of preschool life. Somehow, cold is the middle name of all preschoolers. Lol. Our main worry though was that this time around, we had a baby in the house. Ayemye was barely a month old by then. Asempa was still in the “I can’t believe I have a brother” phase so he always wanted to go near the crib. When he wanted to be extra naughty, he will climb into the crib when we took Ayemye out. Just because. 🤦🏽‍♀️

Anytime he did that, we’ll give him a warning and then change the cot sheet. But he really enjoyed this game. I could put in a new cot sheet and he’ll do this and I’ll have to change it again. Toddlers! I remember very well a day in February when he did this and I can’t tell why but I chose not to change the cot sheet that day. I am confident that single mistake was the beginning of my woes.

The day before Ayemye turned 2 months, I took him to my parents’ in order to attend a lecture. They called in the middle of the class to say he was crying and was unconsolable. Well, this was strange because Ayemye had been a good sleeper from day one. All he needed was a good bath and enough breastmilk (pumped or from the breast) and he will be ready to take a snooze. Realising how strange this was, I left the class. (To be honest, the class naaa, I wasn’t seeing top. Aren’t we tired? 🤣🤣🤣)

I got there and sure enough, he was crying so much. I took him and attempted to breastfeed, but he just wouldn’t take the breast. I decided to pace in the hall with him and that calmed him down. I can’t remember whether it was his idea or mine but eventually, he started to breastfeed while I was carrying him on my chest and still pacing. He finally fell asleep. I carried him a bit more before putting him down but he woke up to start crying again. My parents and I kept wondering what the problem may be. He hadn’t pooped yet that day, so we finally concluded it may be a case of constipation. Well, he later settled enough for me to drive home.

He pooped on the way so I gave him a bath immediately I got home. He remained calm. I called mum to say it must have been constipation after all because he was calmer. That’s how the evening ended. But the journey had only just begun. He awoke at night with this weird cry. It was not continuous enough to be a cry and yet it had all the “painfulness” with a baby’s usual cry. Maybe, I can call it a grunt? Boy was I scared! Then, a fever came in too. Arghh! The night never seemed to end. I mean, we could have gone to the hospital then but it also didn’t seem scary enough to warrant a dawn hospital visit.

Finally, morning came. After seeing the doctor and doing some labs, the conclusion was that he had an “infection” and considering his age and his temperature (above 38ºC), he needed to be admitted. Thankfully, Asempa was on midterms so he was at my in-laws’. Not my plan for my weekend at all, but yeah, that’s what babies do to your plans sometimes. Hubby went home to get us our stuff and some food and then later had to go to work.

Ladies and gentlemen, being admitted in the hospital is never fun. Staying in the hospital because you have to watch your baby who has been admitted is ten times worse. You are strong and cannot fall asleep but you have restricted movement. One of the most frustrating parts is to monitor the cannula on your baby so that it doesn’t shift. When it does, it means it has to be redone and it’s another crying journey. Their veins are already so tiny and difficult to find so… 🤦🏾‍♀️ I remember a nurse came in to administer a medication about midnight and it had shifted. She attempted to get a new one done on the other hand and both legs without success. Mind you, each attempt is a prick of a needle and a wail of pain from the baby. Finally, a nurse who had a better track record with babies had to be called in.

By Sunday morning, I was done with this place. The paediatrician didn’t think so though. They never do. In hindsight, it is with good reason because babies that young are too fragile so they need to be certain they are stable before they can be discharged. Hubby was coming in whenever he closed from work to bring us food, hang around for a while before he had to leave again. In between these visits, I befriended a grandmother who was watching her granddaughter of about 10 years. Her emotions were the same as mine. She had been “assigned” the stay-in duty because the girl’s mum had to stay home with the other kids. Sigh. It never ends eh?

We finally went home on Monday morning. You will think I had been imprisoned for 48 years instead of 48 hours. Lol. Being certain that cot sheet I hadn’t changed was the cause of this drama, I went home poised to be the most careful mum ever. Ha! If only I knew what was ahead.

Exactly 2 weeks later, Asempa had a fever. He went to the hospital with Daddy, got some medication, but ended up throwing up every single thing he took in that Friday evening, including the medicine. We had no choice than to go back because the fever just wouldn’t go. Back we went, and as expected, the doctor asked that he stays in for the night. Even though I had a baby to take care of, a sick Asempa was a baby to me so it was so hard to go home but I just had to. I will allow you to guess the number of times I called to check in on Daddy and Asempa between that night and the morning.

By morning, my boy was back. He was walking up and down, talking and playing. The paediatrician, seeing this, concluded he could go home. And that’s how by 4pm, the family of 4 was home again. He ate, took his meds and slept. He woke up to throw it all up, and the fever was back again! What was this? Sigh! So, it was hospital time again. At this time, I had started to get worried about Ayemye. If my theory that he had caught the last infection because Asempa had laid in his bed with a cold was right, then definitely, going with him to the hospital was a no-no. They were finally discharged on Sunday evening.

You guessed right. Two weeks later, the day before Ayemye turned 3 months, it was hospital time again! 😭😭😭 This time, when the doctor told us we had to stay in, I couldn’t even feel. Like I was just tired. When she came in the following day and asked if we wanted to go home, I had nothing to say to her. We stayed in from Friday evening to Sunday evening. Need I mention? I had a test coming up so I had to attempt to study amidst all these emotions.

After this particular incident, I always feared that I will pick up Ayemye to notice he had a fever. Yes, it had gotten that bad. Within the next two weeks, both Asempa and Ayemye visited the hospital again but it was a mild case of the “infection” so they didn’t get admitted. As Ayemye’s fourth-month birthday approached, my only prayer was that he won’t spend it in the hospital. I thank God that prayer was answered.

And I thank God that season was the last of its nature we’ve had. Since then, we have not been admitted again and not had to visit the hospital as frequently.

So yes, without wanting to sound like a prophet of doom, “in sickness and in health” is one of the vows you take when you become a parent. It may not be as bad as we had it in that season. In fact, I pray it isn’t, because it sure wasn’t fun. Whenever you have to go through a time of sickness, just remember that just like everything else, it shall pass. When I was not feeling too emotional, I tried to use the time as a period of rest. After all, no cooking and cleaning. Ha! It was also great to have the support of hubby through it all. Oh well, maybe when we take the vows, we are not only vowing to support each other when either of us is ill but also when our kids are. Haha!

Let me end before I turn into a marriage counsellor. 😊

Got any contributions or questions? Do leave them in the comments below.

4 thoughts on “In Sickness and In Health”